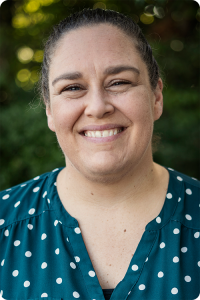 Alida Gardiner is the VP of Operations for the YMCA of Easley, Pickens & Powdersville, though she started with our Y association in 1998 as a Camp Counselor.

In her role as VP of Operations, Alida works with all of our fabulous staff and volunteers to make the biggest impact we can in our community, meeting people where they are, loving them well and helping them become who God has called them to be. She oversees the Branch Executives for the Easley, Pickens & Powdersville YMCAs as well as the Childcare Branch and leads the execution of the Y’s programming.

Alida loves being the VP of Operations because she gets to help develop our staff to be the best they can be. She also gets to lead strategically, coming up with new – sometimes random – ideas, but also gets to dig into the tactical side of program execution.

When she’s not at the Y, Alida loves to read, sketch and to be outside. She especially loves hiking. On a hike in the Joshua Tree Desert National Park, she got lost for a few minutes without water, a compass or a map. She says it was both awesome and a little terrifying.