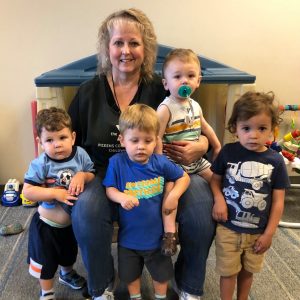 Mrs. Carol has celebrated 5 years with us at the Powdersville YMCA! During her time with us (so far!) she has served so many families and cared for so many of our youngest members.

Read her story below:

“It’s hard to believe it has been 5 years since the opening of the Powdersville YMCA and incredible at how much it has grown in just a few short years.

My time here, working in Childwatch, has been fulfilling with the families I have become acquainted with and the children I’ve gotten to know, bond with, and watch grow into their own little personalities, with several of them starting as babies.

The experience of watching these kids has been filled with excitement, tons of laughter, hugs, smiles, singing fun songs (some of which I make up), being spit up on MANY times, baby snuggles, one mishap while changing a baby’s diaper, as well as many tears shed, which happens often with more than one crying at a time. But, we survive, even if it means holding as many as three at one time in my lap.

A lot of kids have come through the doors in Childwatch and the numbers are continuing to rise. The numerous sets of twins in 5 years has been phenomenal (14 that I can recall). Not to mention, the families who have fostered children with some being adopted into these families.

Friendships have been developed with some great co-workers, as well as members outside of Childwatch. Four years ago, I became a mentor at Spearman Elementary.

I have enjoyed my time with the Powdersville YMCA. It’s a great work environment and I hope to be around a little while longer.

“I’ve been thinking about it, and I want to donate my tractor collection to the Y.” Sid Collins, President & CEO of the YMCA of

Mrs. Carol has celebrated 5 years with us at the Powdersville YMCA! During her time with us (so far!) she has served so many families

The Y Mentor Program serves more than 300 students in Anderson School District One and Pickens County and matches students with a caring, trusted adult who

Your Y is Here for You

The COVID-19 pandemic has brought unique challenges for us all – financial hardships, educational shifts, and challenges to the physical and emotional wellness of so

Our Y staff has had the opportunity to provide care for many of our area’s children during Summer Camp as well as Emergency Childcare during the spring.