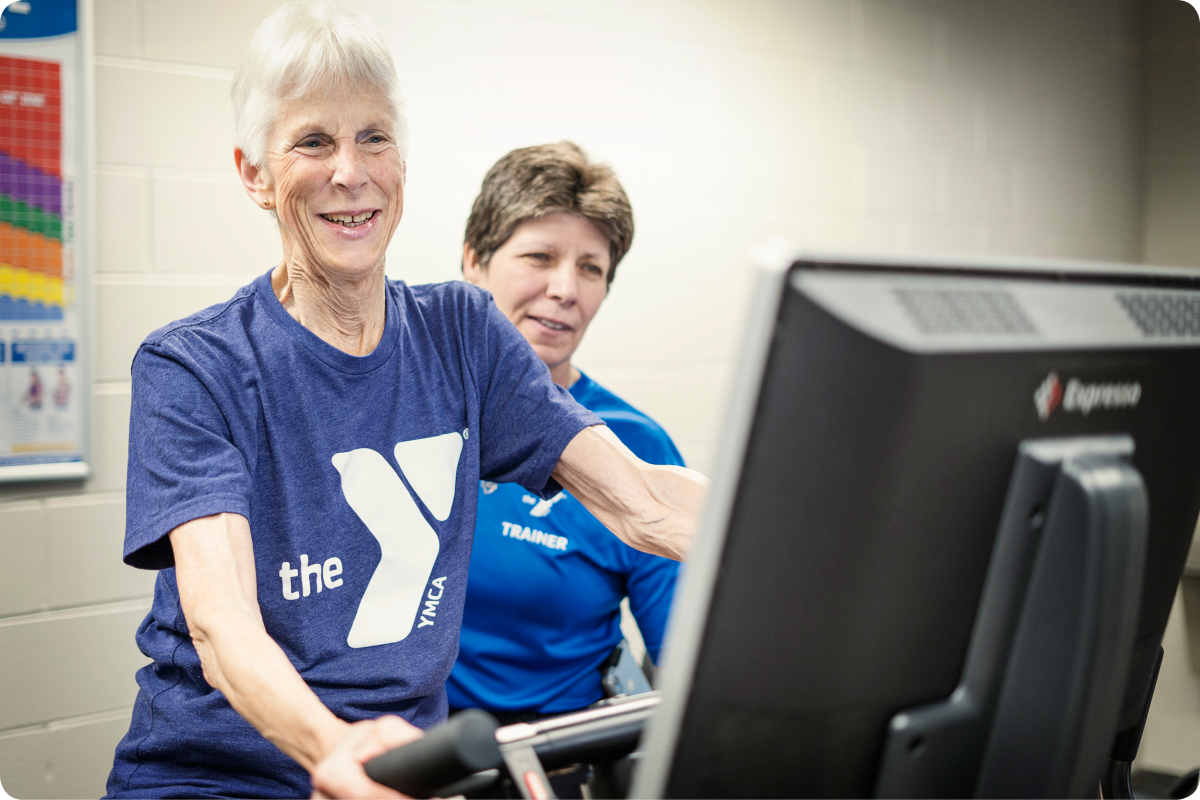 When you see Barbara Dooley on the Expresso bike at the Pickens YMCA, you’d never know the struggle it took to get to that moment. Diagnosed with Parkinson’s Disease in 2006, and recently coming off a second knee replacement, everyday tasks are small battles for Barbara.

But with each battle comes another win for Barbara.

“In reality, it’s a victory for anyone with Parkinson’s to get out of the bed, get themselves dressed, and get to the Y. That’s quite an effort,” Barbara said. “Once I get here, I’m always glad I came. Every little step is a victory.”

Originally from New Jersey, Barbara and Chuck eventually settled in Pickens in 2010 to be close to one of their four sons, a local chiropractor who attended Clemson University.

“That was part of the reason to move down here, to be closer to family,” Barbara said.

Upon their initial move to Pickens, Barbara and Chuck joined the Pickens YMCA and also got connected with the Greenville Area Parkinson Society.

Beginning in 2018, the YMCA of Easley, Pickens & Powdersville made a commitment to bring Pedaling 4 Parkinson’s to the association, initially piloting the program at the Pickens YMCA before expanding to the Easley & Powdersville YMCAs in 2019.

“It’s a wonderful opportunity, because I can do this close to home,” Barbara said. “The program is a huge asset and I’ve been doing it for over a year since the program was established.”

Pedaling 4 Parkinson’s is a research-based wellness recovery program that helps people who have been diagnosed with Parkinson’s disease. Research conducted at the Cleveland Clinic showed a 35% reduction in patient symptoms by the simple act of pedaling a bicycle at a rapid pace.

“(With Parkinson’s), you lose control of your involuntary muscle movement. The consistency of biking and the repetition, but it works to slow the progression,” Barbara said.

Barbara, and other program participants, attend one-hour sessions at least twice per week for 6 weeks. During the sessions, which are led by a Parkinson’s Wellness Recovery trained instructor, participants pedal on the bike at a rapid pace, engage in stretching exercises and spend time in fellowship with each other.

“When you’re with a group of people, you’re motivated to do your best. Just being together, the support is wonderful,” Barbara said.

While pedaling is not a cure for Parkinson’s Disease, there is compelling evidence that it does make a real difference for many.

“The thing about Parkinson’s disease is that no two people are having the same experience. The symptoms vary in severity, and that’s really what the exercise is designed to impede, because you can’t stop it,” Chuck said. “It’s a nasty disease, but it’s inspiring to these people get knocked down and get back up again.”

Learn more about Pedaling 4 Parkinson’s and how you can be part of the program.

The Y Mentor Program serves more than 300 students in Anderson School District One and Pickens County and matches students with a caring, trusted adult who

Your Y is Here for You

The COVID-19 pandemic has brought unique challenges for us all – financial hardships, educational shifts, and challenges to the physical and emotional wellness of so

Our Y staff has had the opportunity to provide care for many of our area’s children during Summer Camp as well as Emergency Childcare during the spring.

Always moving forward, the Y pivots to serve the current needs of the community. “Over the past few months, while our world has navigated the

Every time Randy Brown comes into the Pickens YMCA to exercise, he has a picture in his mind. His “why” is crystal clear. He knows